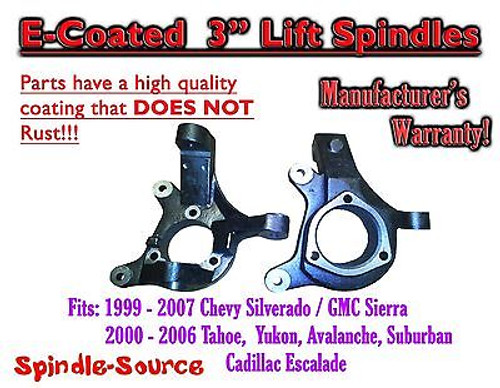 
These spindles have been E-Coated.  For those not familiar with this process here is a brief intro:
Electrocoating (E-coat) is an electrically-applied paint coating. It is also known as electronic coating, electronic painting, and electro photo coating. E-coating was developed originally for the automotive industry because it provides superior coverage, adhesion, and corrosion resistance. It coats any metal (aluminum, zinc, brass, steel) that conducts electricity.It is a process in which electrically charged particles are deposited out of a water suspension to coat a conductive part. During the electrocoat process, paint is applied to a part to produce a uniform film thickness.  Since these parts are coated evenly with this process, they do NOT rust.  All Non-machined location on these Spindles have been E-Coated.
No Need to paint before putting on your vehicle!  Keeps the underside of your ride looking clean and RUST-FREE!
THESE SPINDLES ARE FOR 2WD ONLY!!! THEY WILL NOT FIT 4WD MODELS
Description:
Kit includes a pair of Lifted 3" spindles / knuckles, keep your stock ride!!!!!!!!!
Included:
Vehicles:
2WD ONLY.  Non-HD Only.
Requires Min 17 Inch rims with max backspacing of 4.625"
THESE SPINDLES ARE FOR 2WD ONLY!!! THEY WILL NOT FIT 4WD MODELS